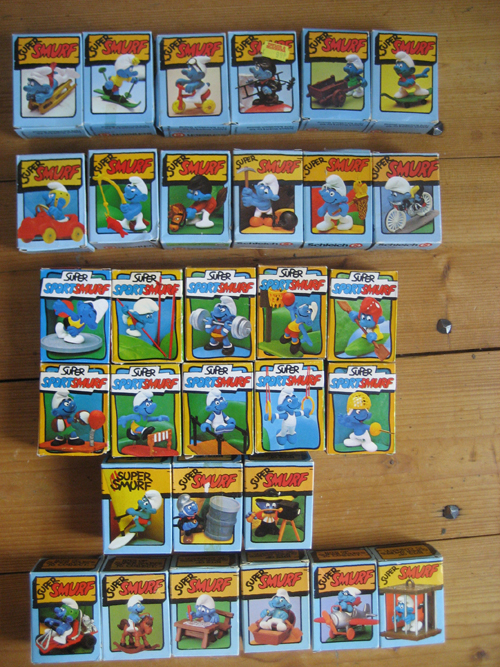 Here are all the boxes used in UK during the time BP and National had the license for the smurfs. The first 6 boxes were made in Germany and were the only supersmurfs available in March 1979. The National petrol attendant was also possible to buy then, but I have that box together with the National playsetboxes, and therefore not on the picture. The next 6 supersmurfs were the ones sold before the Oilympics promotion in summer 1980. And then you can see all the 10 sportsuperboxes sold for  and together with the oilympics stadium during the summer 1980 when the summer olympicgames took place in Moscow. The next 3 boxes were sold before October 1981, then imported by Coronet but still sold under the National Benzole license. The last 6 boxes were sold after October 1981 in the UK and all these boxes have one thing in common.

They are all marked Maia Portugal. 🙂 I bet many of you had not noticed that. The reason for this is that the Victor Maias factory in Portugal painted and made the smurfs for the UK market. In the beginning German- and Hongkong-made smurfs were sold by National, but after the lead paint scandal in October 1978, Schleich started using Maias factory for the UK market( yellow dots). Later some of these boxes also were sold with a sticker marked Maia Borges, but that I believe was in mid 1980s ( check Maia Borges catalogue 1985).

The name Solito is probably only the company making the boxes( the fireman- and photographer-boxes are only marked Solito, without Maia) 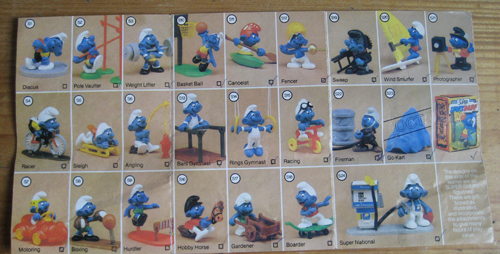 Here is a picture of all the supersmurfs sold in UK in autumn 1981. It is from my Coronet leaflet. As you see Go-cart is not shown but marked to be sold in October. This leaflet also tells us National Benzole still had the license by Peyo and SEPP for the smurfs.

And here are the correct boxes going with that leaflet. 🙂 In the same order.

The airplane-box ( or smurf in cage??)was the last supersmurf made for the UK when National had the license. In 1983 Schleich made new boxes with three languages( german, french and english), replacing the old german/french boxes and also these UK boxes.