In 1991 Schleich started marking their smurfs Germany instead of W Germany, as they had done before the reunion of Germany. So West Germany stopped existing on new molds then. On the old molds they just blocked or removed the W in front of Germany. As you see on the picture almost the same type of marking was used in 1991 and in 2004, with double Germany. First Schleich Germany and then also Made in Germany. Also always CE markings after 1991. All new smurfmolds made after 2004 are marked Made in Germany, but between 1993( when the first new mold with China markings appeared) and 2004 both country-markings were used on the smurfs. But smurfs like the Basketball made in 2002 still got the Made in China-markings all the way until they stopped making it. Even the one to the right with addressmarking on the shorts made in 2009/2010 have the made in China marking. 2002 was also the last molds getting the blue dot. So therefore the one to the left with the dot was the first one made. The blue dots were only used between 2000 and 2002. So these were the last ones getting the blue dot, which represented a new PVC formula. So if you have any of these smurfs with blue dots they are among the first ones made. I see now that I forgot one of the smurfs made that year on the picture, since it is only 7 smurfs on the picture. 🙂 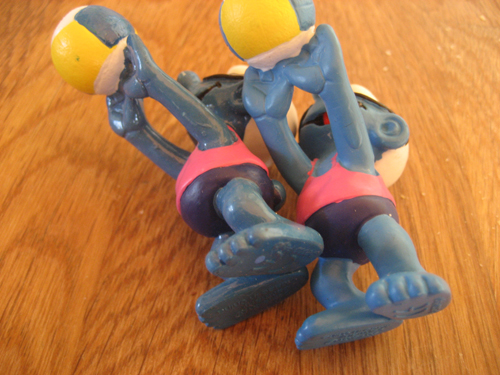 So for example these smurfs made during this shiny paint-era exists both with shiny and matte blue paint. One interesting thing also is that in the beginning you see that they painted the space between the shoelaces grey on this hiker. Because of the shiny blue paint and the blue dot we know this was the first variation of this smurf. Most likely they stopped painting this part because it was unnecessary and timeconsuming, or even more likely because it was wrong??? That space between the laces should be the same colour as the shoes, or!! 🙂 On the picture; blue dots and shiny paint to the left and matte paint and without dot to the right.

By the way. Can´t wait to get the new beachvolley-smurfette and display it together with the existing one!!!