As you may know there are lots of smaller differences on the polkadot-boxes. One very interesting thing that many collectors have missed is that also the boxes where marked with a blue dot during 2000-2002, when the blue dots were used on the smurfs. So for example this box for Smurfette on the beach can be found without blue dot and also with printed blue dot. Most of the time a blue dot-sticker was used, like on the box to the left. But some of the boxes were made with printed blue dot like the one to the right. Therefore you also will be able to find the same differences as on many of the other regular smurfs made during this time. The shiny blue paint was used last time on the 2000 mold smurfs I think. So shiny with blue dot and then matte paint without dot and the last one is the adressmarked smurfette from last year no longer sold. The same differences will be found on almost all of the smurfs made during these years. Shiny paint vs matte paint. If you look at the overall on this racer there is a big difference. 🙂 Just like Schleich do on their boxes today, they for a time used this datemarking inside the boxes and therefore you can easily date the smurfs. Todays variation of the boxes with datemarking outside the box, shown to the right on the picture. 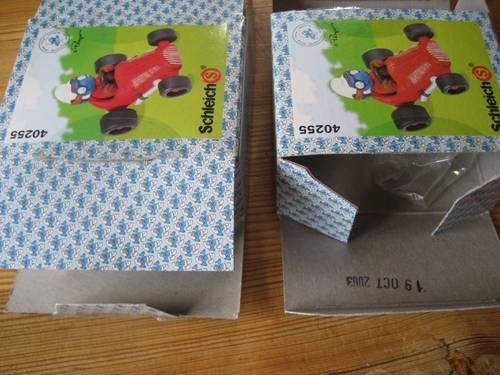 If you are a really extreme collector regarding variations there also are differences not seen from the outside of the boxes. For example you can see that there is a different ”foldingsystem” on these boxes. 🙂 The first one used is the one to the left.