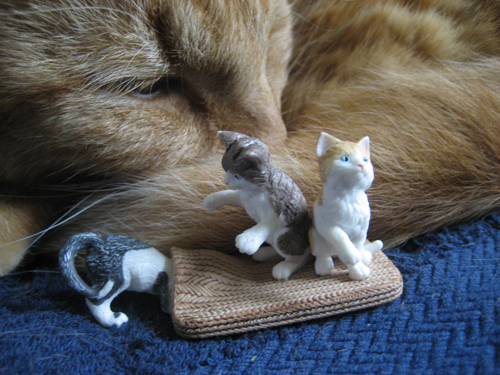 I just love the new kittens by Schleich. Look at the details and pattern on the blanket. We bought the scenery pack (41801) for Ally but it is also possible to buy only the kittens( 13674). The pattern is almost the same on our blanket as on the Schleichmade one?? 🙂

The old tradition in Sweden this day is to remember Jesus sufferings on the Cross, by punishing yourself. Like walking with stones in your shoes all day or similair. So how will you punish yourself today? And I don´t mean eating large amounts of unhealty candy!! 🙂

They said on the news that in Sweden we eat twice as much candy compared to other countries during the easterholiday? 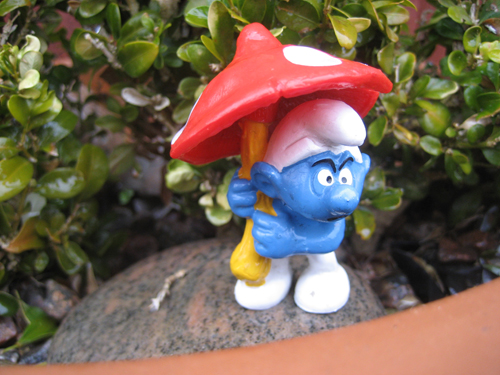 After a week with lovely weather( but cold nights) we have rain today. So the first time this year we will use our umbrellas. 🙂 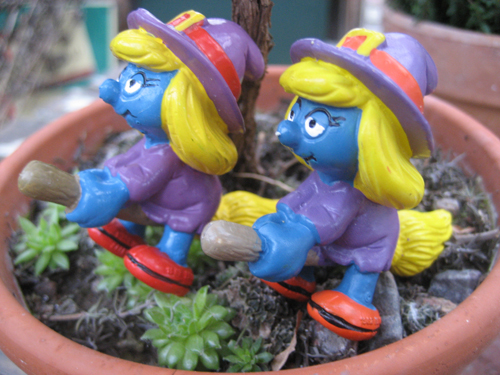 Eventhough these Smurfettes were sold as Halloweenfigurines( articlenumber 6530) in the USA in 1983, they are perfect figurines to explain the swedish old Folklore tradition about the witches. Today is the day the witches fly to ”Blåkulla” to meet with the devil and party all days and nights until Easter. 🙂 It is also common that people light fires to try to scare them away when they return.

We have bought a lot of candy to be prepared, because young children dress up as witches and knock on doors getting candy for their easter eggs. The really young witches looks so cute!!! 🙂

Regarding the Smurfette, witch on broom, it can have markings from both Sri Lanka and Portugal. But the biggest difference is the different colours on the shoes, red or orange. 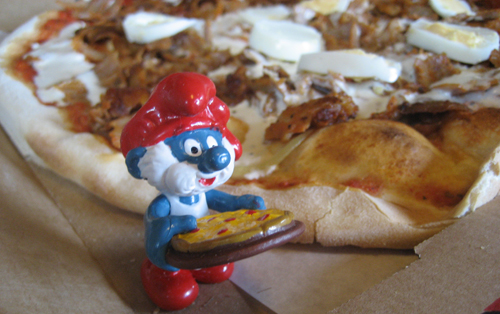 After a hard week, finally we get 4 days easterholiday. We deserved a easy dinner today so we ordered Pizza. And since it is Easterweek, we put some eggs on it to slowly get the Easterfeeling. 🙂 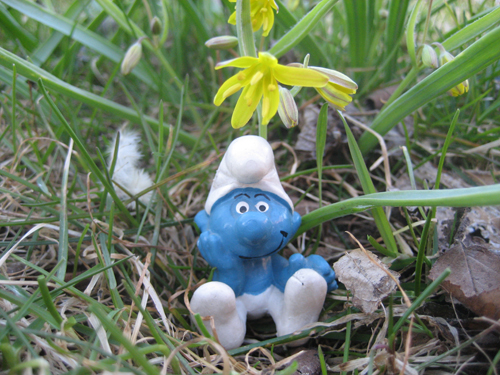 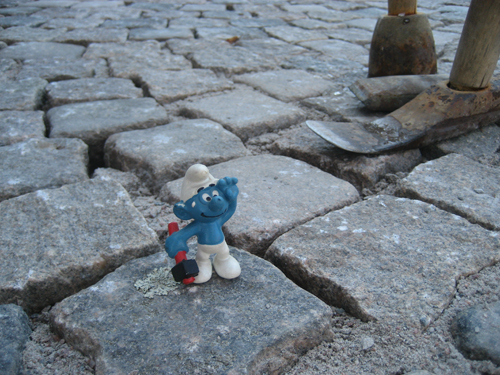 Today I got some help with the stones and finished this area for a customer living in my neighborhood. I just love this material because it only gets more beautiful with age. Over 100 years old and still can be used for many generations ahead!! 🙂 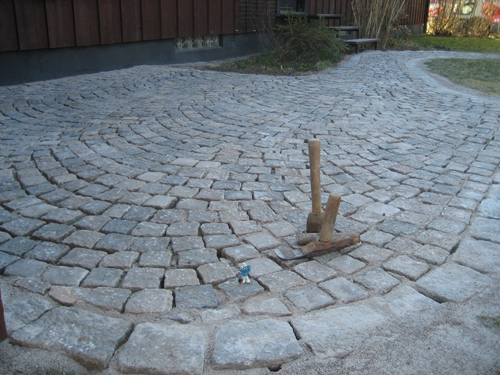 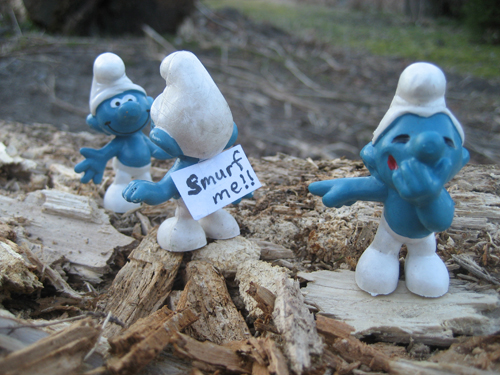 Tomorrow is Great Wednesday and in Sweden it is the day when everybody puts funny notes on each others backs. So if anyone smiles at you, check your back!!! 🙂 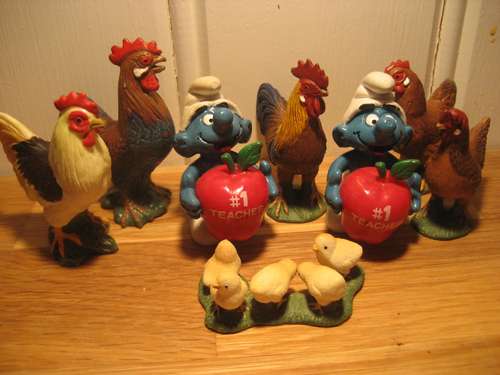 Today is probably the smurfiest day of the Easterweek( Holy week) in Sweden. It is BLUE monday. The Holy Week actually started yesterday with Palm Sunday.

The name Blue Monday comes from ”Blauer Montag” in Germany. Originally the Blue Monday is another monday but nowadays the monday in the Easterweek also is called Blue Monday in Sweden.  I think it also is the end of the Lent and we today traditionally were allowed to eat normally again???

Another interesting fact is that the song ”Blue Monday” by New Order was sold 1983, just as the year of the #1 Teacher smurf!! 🙂 Fantastic memories from that year!!!

Anyway the smurfs love Easter and especially with other Schleich figurines, like the animals on the picture!! 🙂 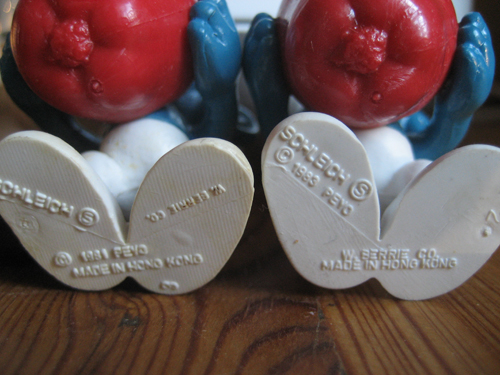 So when the Lent is over we can give the teachers nice red delicious Apples again?? Regarding this #1 teacher figurine only sold in 1983 by W Berrie with articlenumber 6565. It seems 2 smurfmolds were used for this seasonal figurine. The Pumpkinmold and the Applemold. Therefore you can have both these markings under this smurf. In the beginning the Pumkinmold was used, but that mold was in 1983 sent to Portugal and got changed markings? 🙂

HalloweenPumkin was sold with articelnumber 6530 in the US in 1981, but in 1983 they added the new halloweenSmurfette with broom instead. So it could be that they then send the Halloweenmold to Portugal then?? 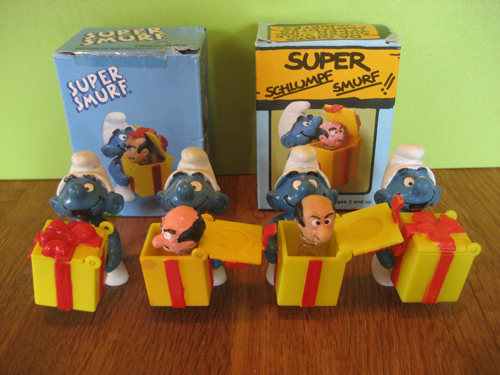 Since it is April Fool´s Day today I thought I would share information about this fantastic supersmurf Schleich made 1985. The first time it was sold was in autumn 1985 in Europe, but it was sold before that in USA, maybe early or mid 1985. The first picture of this smurf is from the 2 page broschure from autumn 1985. That one tells us Schleich released 3 new supersmurfs and 8 new regular smurfs that autumn together with the Jubileedisplay( 1965-1985). That one is never shown in any catalogues I think. Only in this broschure.

Only the boxes shown on the picture were used for this supersmurf. And I showed 2 variation of each smurf so you can see the differences both on the box, HK-box has higher ribbons on the top, and on the gargamels head, which is soft plastic in the german variation and harder material on the HK-variation. 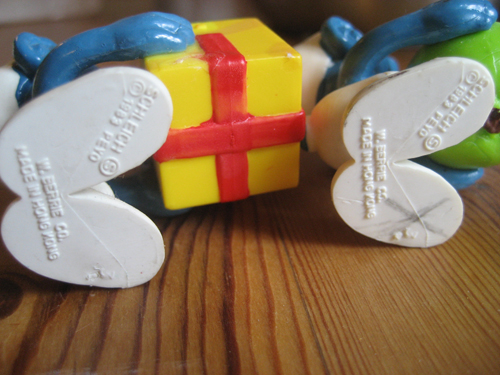 They used the same smurf as 20160 Apple for this supersmurf. Hongkong-variation. 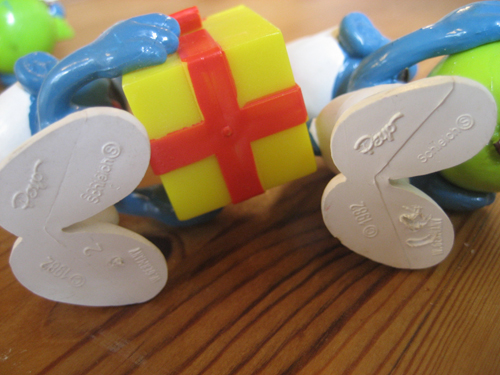 German variation also used the same smurf used for the smurf with apple in Germany. 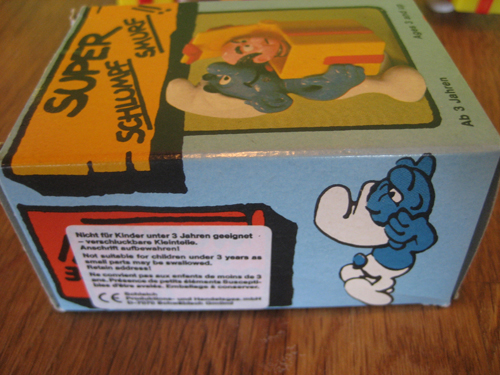 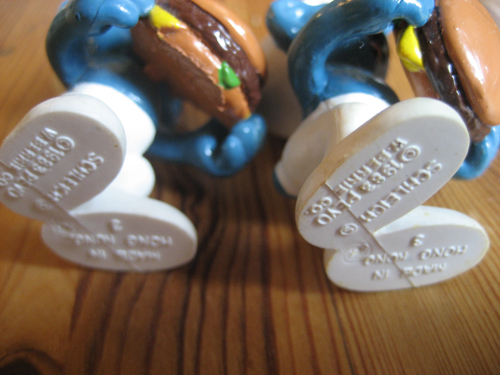 The hamburgersmurf made in Hongkong with W Berrie markings also has 1983-markings. That one exists both with and without holes in the chest. In the beginning the hamburger was only attached to the hands, but later it got a stuck plug and then also was attached to the chest. However this hole is higher up the chest and therefore the trick-box don´t fit that smurf. So this marking don´t go with the supersmurf 40247. 🙂